Jeff Elliott, Senior Vice President, Engineering & Digital Technologies at AIMM is the Associate Producer of the National Fallen Firefighters Memorial which was held in in Emmitsburg Maryland this past weekend. President Obama attended the event and honored 87 fire fighters who lost their lives in the line of duty last year.

He captured these behind the scenes images of President Obama as he addressed the crowd.

On behalf of the American public, President Barack Obama expressed deepest sympathies to the survivors of 87 fallen firefighters during the 34th annual National Fallen Firefighters Memorial Service on Sunday, October 4.

The President spoke of bravery and courage
that is instinctive among all firefighters, who are willing to walk through fire to save a stranger’s life.

“Those we honor today lived a fundamental principle that binds us as Americans: 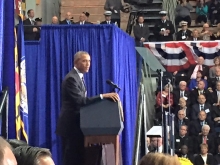 I am my brother’s keeper and I am my sister’s keeper. That we look out for one another,” he said.”