AIMM is at Wallops this week. This is the Global Hawks & HS3 NASA is preparing to fly two unmanned aircraft over Atlantic Ocean hurricanes this summer. NASA’s Hurricane and Severe Storm Sentinel, or HS3, mission is a five-year project that first took to the field in 2012 from NASA’s Wallops Flight Facility at Wallops Island, Va. HS3 is investigating the roles of the large-scale environment and storm-scale internal processes in hurricane formation and intensity change in the Atlantic basin. HS3 scientists will use two NASA Global Hawk aircraft during the campaign, one with instruments measuring the environment around a tropical cyclone and the other with instruments looking into the storms. 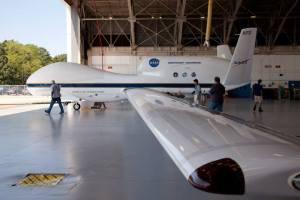