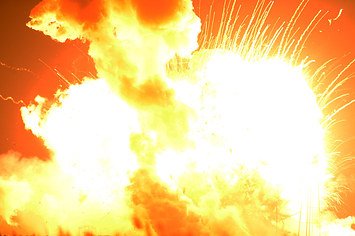 NASA reports the Antares rocket “suffered a catastrophic anomaly” just after liftoff at 6:22 p.m. There is significant property and vehicle damage at Wallops Flight Facility, but no people have been injured.

The explosion occured six seconds after liftoff, NASA officials said during a live stream after the explosion. The cargo vehicle attacked to the rocket was carrying 5,000 pounds of supplies, including about 1,300 pounds of food. The cargo also included an array of science experiments, including some designed by high school students. 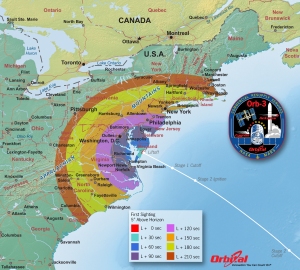 Can you see the Antares launch from your location? The Antares launch scheduled Oct. 27 will be visible to residents in the mid-Atlantic, weather permitting. Lift-off of the Antares rocket is scheduled for 6:45 p.m. (EDT), with rendezvous and berthing with the ISS early in the morning on November 2. Taking advantage of Cygnus’ operational capabilities, Orbital is launching the Orb-3 mission to orbit several days earlier than necessary to preserve schedule flexibility and time its arrival at the station to conform to other visiting vehicle operations.

Orbital Sciences Corp. will launch its next mission to resupply the International Space Station Monday, Oct. 27, and AIMM will assist NASA Television in the broadcast live coverage of the event, including pre- and post-launch briefings and arrival at the station.

Orbital Science’s Cygnus cargo carrier is transported Oct. 16, 2014 from the NASA fueling facility on Wallops Island, Virginia to the Horizontal Integration Facility where it will be mated to the Antares rocket for the Orbital CRS-3 cargo mission to the International Space Station. Image Credit: NASA/Jamie Lee Adkins

A prelaunch status briefing will be held at 1 p.m. Sunday, Oct. 26, followed at 2 p.m. by a briefing to preview the mission’s science cargo. A post-launch briefing will be held approximately 90 minutes after liftoff.
Media who wish to ask questions remotely during the briefing must respond to Rachel Kraft at rachel.h.kraft@nasa.gov no later than 30 minutes before the start of each briefing. The public may submit questions via Twitter using the hashtag #askNASA.

Cygnus will transport almost 5,000 pounds of supplies, including science experiments, crew provisions, spare parts and experiment hardware. It will arrive at the station Sunday, Nov. 2. Expedition 41 crew members Reid Wiseman and Barry Wilmore of NASA will be ready in the station’s cupola to capture the resupply craft with the station’s robotic arm and install it on the Earth-facing port of the station’s Harmony module.

Continuing the tradition of naming its spacecraft after astronauts who have made significant contributions to spaceflight, Orbital dubbed this Cygnus resupply ship the SS Deke Slayton. The name is a tribute to original Mercury 7 astronaut Donald “Deke” K. Slayton, who flew on the Apollo-Soyuz Test Project mission in 1975 and championed commercial space endeavors after retiring from NASA in 1982. Slayton passed away in 1993.
This mission is the third of eight Orbital flights NASA contracted with the company to resupply the space station, and the fourth trip by a Cygnus spacecraft to the orbiting laboratory.
For a full media schedule and more information about the Orbital CRS-3 mission, visit:
http://www.nasa.gov/orbital
For video b-roll and media resources on the International Space Station, visit:
http://www.nasa.gov/stationnews
For more information about the International Space Station, visit:
http://www.nasa.gov/station

UPDATE: The scheduled launch of a Terrier-Lynx suborbital rocket for the Department of Defense Saturday, Aug. 16, from NASA’s launch range at Wallops Flight Facility in Virginia has been postponed. The new launch date is 9 to 11:30 p.m. EDT, Saturday, Aug. 23.

Smartphone users can download the “What’s Up at Wallops” app, which contains information on the launches as well as a compass showing the precise direction for launch viewing.

According to Orbital’s mission updates, Antares and Cygnus teams are in the advanced stages of preparation for the operational resupply mission to the International Space Station. Over the next 11 days, major operational events are scheduled to take place. Among them, the movement of the Antares rocket to the transporter/erector/launcher (TEL) and a series of tests to ensure all systems are properly working together. The roll out and initial on-pad operations that are currently scheduled for December 15.

Here is a brief video of the launch. Enjoy!

AIMM is at Wallops Island Virginia again this week preparing the studio that will air the live video stream for the ANTARES Rocket and CYGNUS Spacecraft test launch. The test launch, which was originally set to take place today, was postponed until tomorrow. We’ve just received confirmation that the launch will proceed as planned. Stay tuned for the link to watch it live tomorrow at 10:50am.

NASA Wallops Flight Facility Site Director Bill Wrobel has granted Authority to Proceed (ATP) for the Wednesday, Sept. 18, launch of a demonstration mission to the International Space Station by the Orbital Sciences Corp. of Dulles, Va. Orbital is targeting a 10:50 a.m. EDT launch from the Mid-Atlantic Regional Spaceport Pad-0A at Wallops.